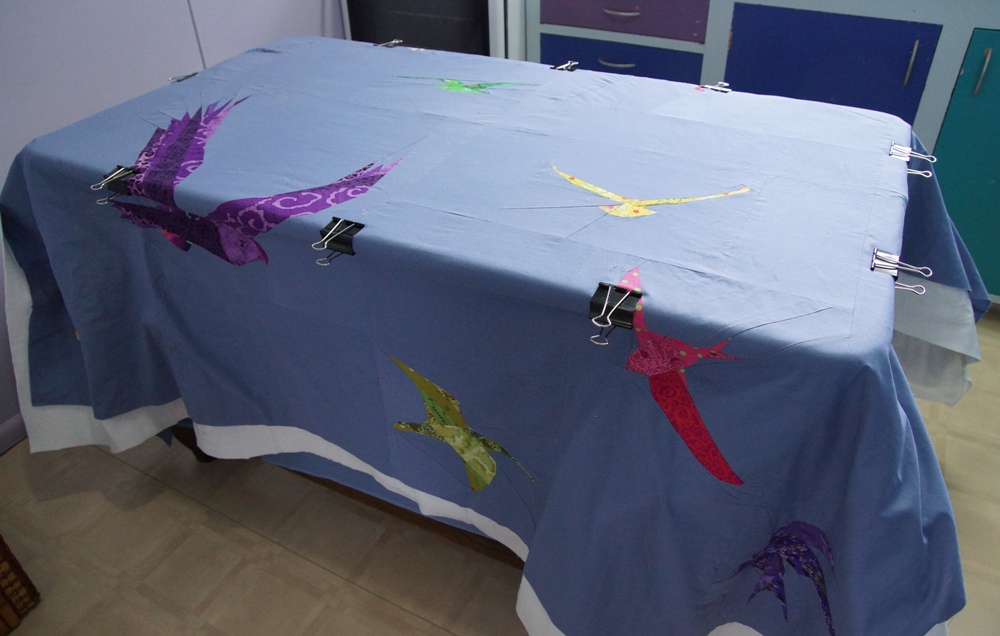 Yep, that one I started ages ago (ok, I just checked, and the quilt-along started in January 2015, so pretty close to three years ago!), which I finished the top for, and then never got round to quilting, because semester started and I was too busy, and then Tartankiwi released three extra birds, which I wanted to incorporate into the back but couldn’t decide how, and then I thought I should probably get a bit better at free-motion quilting before I attempted it, and I couldn’t decide how I wanted to quilt it anyway, and then I was just totally intimidated by its size and by how long it had been sitting there waiting so I felt like when I did quilt it, it would have to be perfect, and then I kept getting distracted by shiny new projects (ok, so that’s been happening pretty much all the way through all the other stages as well), and finally yesterday I told myself it was time to bite the bullet and get it done.
So I spent the afternoon yesterday sewing the backing together, and ironing the top (because apparently if you leave a quilt top folded up in the bottom of your half-finished projects pile for a year or two, it gets a bit wrinkly – who knew?), and then this morning, after I’d scrubbed the kitchen table (and the kitchen floor, because have you seen the size of that quilt?  There was no way I was going to be able to baste it without some of it falling onto the floor at some point.), I finally got it basted, and started the quilting! 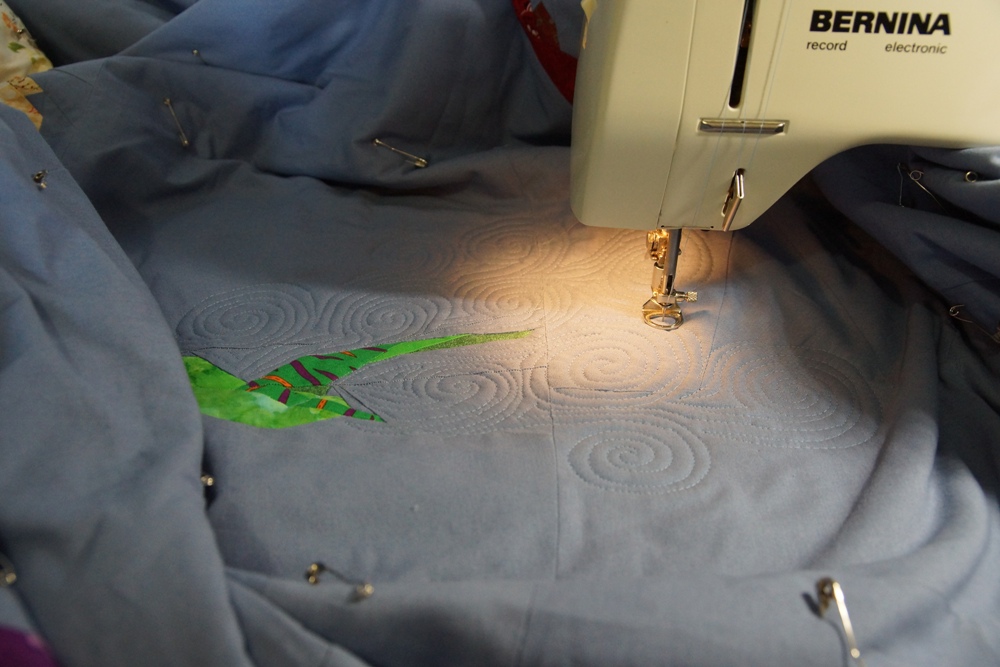 Did I mention this is a very large quilt?  And incredibly heavy?  I am going to have very well developed shoulder muscles by the time it’s finished – moving it around on the machine is a real workout (I am so thankful for my nice new sewing table – quilting it on my old setup would have been impossible).  But I’m pleased with how the quilting is turning out so far – it’s definitely not perfect (the other problem with it being so hard to move is that it’s difficult to keep the motion nice and smooth, so some of my swirls (the swirly patterns are supposed to be air currents or something – it makes sense to me, anyway) are pretty wobbly in places), but hopefully the effect as a whole will make up for the occasional oddity.
Don’t hold your breath for this to be finished soon though – there’s a lot of quilt to cover, and many many hours of work still to be done (and also, much as I enjoy quilting, I don’t really want to spend my entire break in my sewing room, when the sun is shining outside (well, it was earlier – it’s clouded over again now…)).

I *almost* got the corners to line up properly!  One side is a tiny bit off, but not really enough to be seriously noticeable, so I’m pretty pleased with it. Of course, now that I’ve got that particular obstacle out of the way, I reach the even bigger one: it’s time to quilt it.  Dare…

My plan to use spare half hours to sew failed the moment the really cold weather set in, because I’d forgotten just how cold the study can get in winter (for some reason to do with the way the hallway bends just before the door to the study, the warmth from the fire, which happily…

Still no news on the work front, other than that the VC is currently considering our business case, and hopefully should make a decision before our contracts run out (again…).  I’m not sure if I want him to make a decision quickly just to remove the agony of waiting, or if him taking his time…

rother and family were up at the weekend to go to a concert. It was a bit of a flying visit, but I met up with them for dinner on Sunday night, and then took the morning off on Monday (finally using up some time in lieu I accumulated months ago!) so I could faciliate…

Terrible lighting, sorry – I took the photo late last night after my second attempt at sewing the final seam (the first one I managed to misalign just enough to look terrible, so I had to unpick it (so many tiny tiny stitches!) and start again), and my attempt at colour correction of the artificial…