Didn’t manage to get it done in the promised under an hour (it was actually closer to two), but I did get it done. 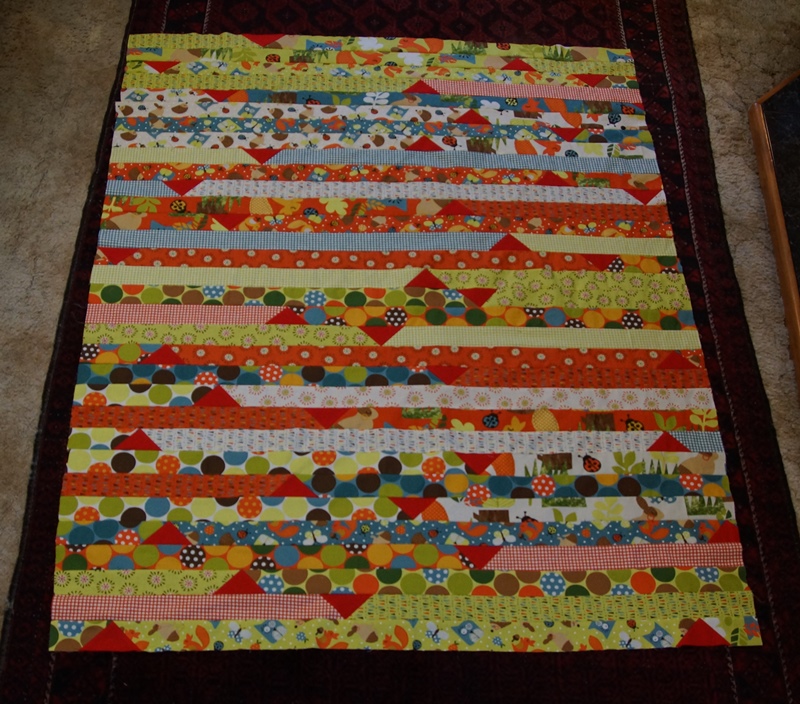 Most of that time was taken sewing the first very long seam (when you fold the super-long strip in half and sew down the entire length), and in untangling the knots it kept trying to tie itself into, but each subsequent seam got faster – both because they halve in length each time, and because the strips are getting wider so more manageable.
It’s definitely not a design for a control freak – once you start sewing you’ve got no control on where the different strips end up (though with a bit of calculation you could probably predict what would end up where, and plan the order of the strips accordingly), so sometimes you end up with the same or very similar fabrics next to each other, and there’s nothing you can do about it.  But that’s the point – it’s supposed to end up looking totally random.
There is some order in the chaos, though.  Because I used a jelly roll, all the strips were the same length, which meant my connecting triangles ended up in clusters.  I think if I made another one, I’d deliberately cut the strips different lengths, just to see what happened.
The red triangles don’t pop as much as I’d hoped, but that might just be the terrible lighting – it’s been a dark, rainy day today, so it was very dull when I took the photo. They’ll probably look different on a brighter day.
So now I’ve just got to quilt it…

Well, my experiment in a new craft is going pretty well so far.  It started with a couple of cheap tables off TradeMe and an old dictionary (Warning to bookcrossers and other booklovers, the following images contain graphic scenes of book abuse. You may want to look away now.): It still needs another coat or…

But I got it done! (I’ll try and remember to take a better photo in the morning when the light’s better, before I wrap it up to take into work and Judy’s farewell party). I had ambitious plans to quilt it with a leafy or flowery design, but then I reminded myself I only had…

I pulled myself away from the birds for long enough this afternoon to bind my experimental quilt: I “cheated” and machine-sewed the binding (otherwise it would have taken me weeks to hand-sew all that!), and there’s a few wee bits where it didn’t quite catch properly so I really should go back and re-do those…