D’s been down again, so of course I’ve spent the last day and a half composing all sorts of interesting and amusing blog posts in my head, and now that it’s back up I can’t remember any of them.  So instead, a few highlights of the past few days:
On Friday I discovered that there are actually some really nice people in the world.  I was waiting at the bus stop in the rain, and as usual the bus was running late, and every time I checked the real-time arrivals thing it would tell me that it was going to be even later.  So I’d resigned myself to being very cold and wet by the time I got home.  Except that a complete stranger stopped her car and asked if I wanted a lift somewhere, which I most gratefully accepted.  (Sorry Mum, I know you spent my entire childhood telling me not to get in a car with a stranger, but not having to wait in the rain for another 20 minutes totally beats stranger danger any day 😉 )
On Saturday night I went to a games night with the Gwilks.  There were enough people that we split into two rooms, so I joined the group playing Shadows Over Camelot, a game I’d actually played before (it’s becoming a joke that every time I go to one of the games nights I end up playing a game I haven’t seen before, and just when I’m getting the hang of it the game is over and I’ll never get another chance to play it, because the next games night there’ll be a new game).  However, this time we were playing a variation on it (so it was kind of a new game, but at least I already understood most of the game mechanics).  It’s a cooperative game, so basically you either all win or all lose, but the variant we were playing had a traitor, so it was them against the rest of us.  Except we didn’t know until the end who the traitor was.  It’s quite a difficult game, and we ended up losing, but it was still a lot of fun.
On Sunday we had a bookcrossing meetup.  Our brunch meetups didn’t suit everyone, so we shifted to lunch instead, and met at the new cafe in the Botanic Gardens.  It was incredibly busy (the line stretched right around the cafe at one point), but we managed to snag a table, and by borrowing chairs from other tables somehow managed to fit all of us around it.  Lots of books being exchanged, of course – the tower of books in the centre of the table was getting quite dangerously high for a while there.
I’d hoped to get some more work done on my experimental quilt, but between all that socialness and having spent a good chunk of Saturday curled up in front of the fire with a good book, I only quilted one square: 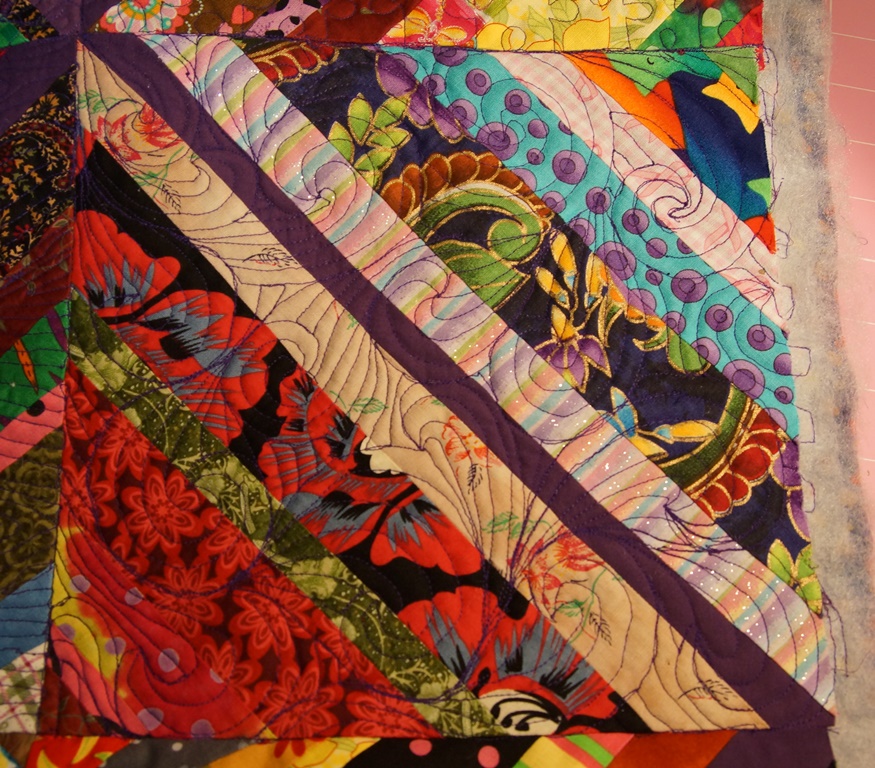 The pattern is called Windswept, and I really struggled to get the hang of it.  I just couldn’t get my speed right or the fabric flowing smoothly, and then just when it was starting to go right I discovered that somehow my backing fabric had got folded over, so I had to unpick a big section and resew it (which is why there’s some really messy bits down the right hand side).  I think it’s one of those patterns which could look really good with a bit more practice, though.
The back looks a wee bit better (mainly because the cotton doesn’t contrast so much, so the wobbles in my sewing aren’t as obvious), but it still doesn’t look much like the tutorial: 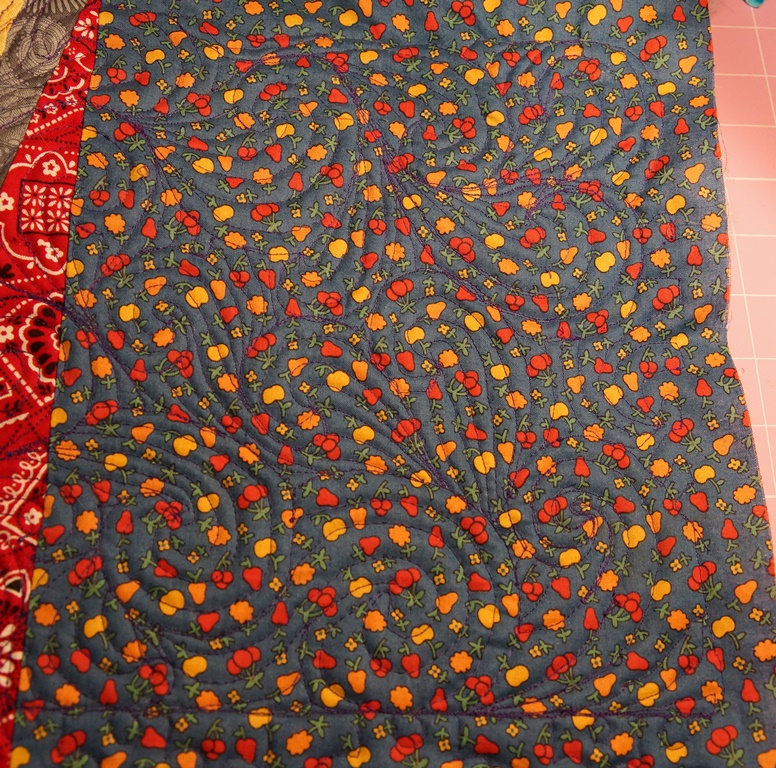 Oh well, the whole point of the experimental quilt is to allow myself to make a mess of it and learn via my mistakes, not worry about it being perfect…

They kept me in the hospital last night (mainly because I was last in the queue for day surgery, so didn’t get out until about 6 pm, by which time it was easier to transfer me to a ward than wait round until I was awake enough to go home), so I’ve only just got…

etzirah commented the other day that in crafts, “The journey is as important as the destination”.  That is so true.  In fact, for me, it’s all about the journey – the destination often bores me by the time I actually reach it. Which explains why I have a trunk full of “finished” projects, mostly cross-stitch…

ight, I’ve decided my impulse to just give away all those old cross-stitch projects that have been languishing in the bottom of my trunk since I finished them is a good one, so this is the first in an occasional series of giveaway posts.  I’m not sure exactly how this is going to work, and…

This weekend was the last of my totally-booked-out weekends of November, and it was the busiest of all (well, apart from the convention weekend, of course).  First, on Saturday, after a quick attempt to clean the house, I went into town to meet up with Harvestbird and family for the Climate March.  There was a…