k, I know I promised to tell you all about my holiday when I got back, and I really did intend to spend yesterday sorting out all my photos and making release notes and writing it all up, but I ended up having a totally lazy day instead and got absolutely nothing done.  And most of today has been devoted to all those boringly practical post-holiday jobs of unpacking and washing clothes and buying groceries.  But that’s all done now, so time to sit down at the computer and tell you all about our adventures…

We got away from Christchurch reasonably early (only slightly later than planned, due to me having prioritised sleep over finishing packing on Thursday night), so the traffic wasn’t too bad on the way up.  The promised police speed blitz was in full swing – we saw many many police cars on the road, and counted five cars being pulled over (one complete with a film crew – presumably for some news item about the blitz).  Didn’t stop everyone from stupid driving, though – we got passed by so many cars doing way over the limit, and there was one particularly scary car we followed through the Lewis Pass that was weaving all over the road.
Our first stop was at Maruia Springs for a quick refreshment break.  Back when I lived on the Coast, you used to be able to walk down to the river from the hotel, but they’ve got it all blocked off now, so our attempt at exploration was limited and we got back on the road to Maruia Falls. 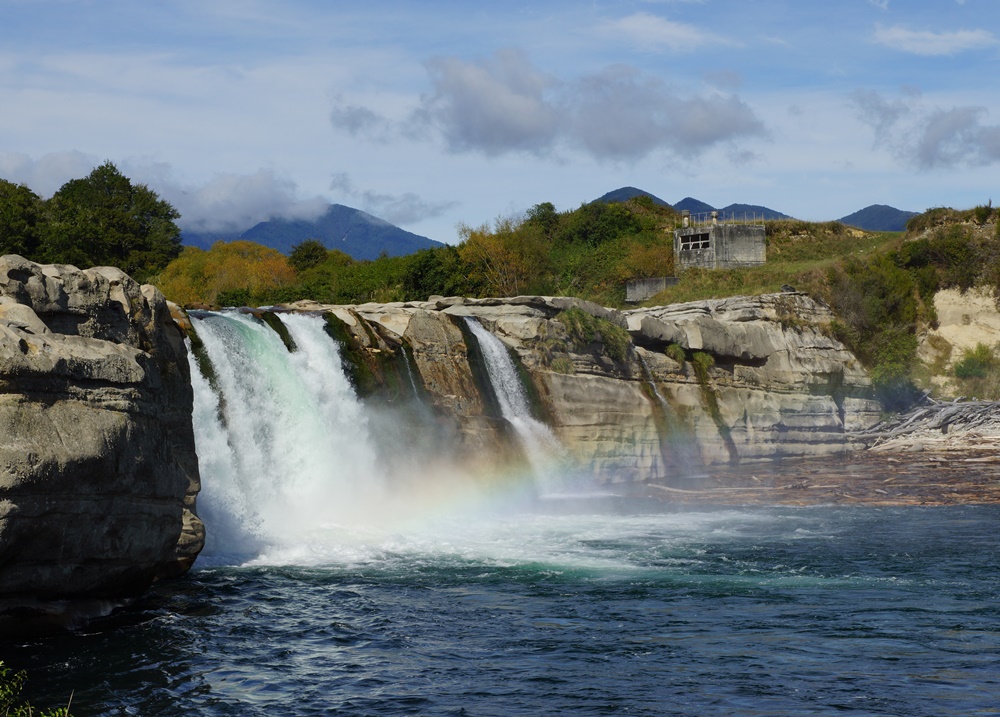 We just missed out on seeing a group of kayakers paddle over the falls – the last of them was just paddling out from under them as we got to the lookout point.  We did see a young man strip down to his undies and jump off the top though, then attempt to convince his friends to do the same.  They all very sensibly declined.
We stopped in Murchison for lunch, and browsed through a really cool antique shop in an old stables.  It was a bit disturbing how many of the “antiques” were things from my childhood! 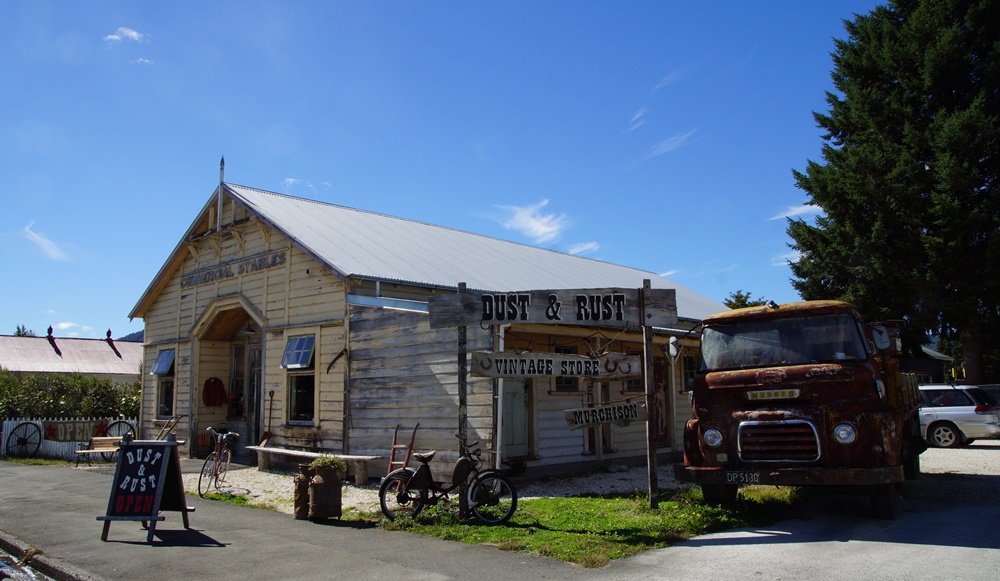 We headed further north, where Nelson’s fruitbowl reputation was upheld by all the orchards we were passing through.  I was puzzled by tall frames in some of the fields which held the remnants of some sort of vine, until Lytteltonwitch figured out they’d probably held hops, which must have already been harvested.  I remembered then from primary school lessons on what the different regions produced that Nelson’s main products (in the 1970s, at least) were hops and tobacco.  And sure enough, we passed a few small fields of tobacco growing further along the road.  It seemed a bit weird to see tobacco being grown so openly – it’s become so frowned upon it feels like it should be hidden away like some illegal drug, not growing in fields on the side of the road.
In Motueka almost all of the shops on the main street had window displays marking the centennial of World War I.  Lots of poppies, of course, and various displays of historical photographs – some of the displays were very well done.
After Motueka was the dreaded Takaka Hill.  For those of you who haven’t been to Golden Bay, it’s one of the more isolated parts of NZ, only accessible via one very narrow and windy road, which travels over the steep Takaka Hill and is prone to being washed out several times a year by heavy rainfalls, which cuts the area off completely.  It takes about an hour to drive over the hill, so you definitely feel like you’re in the back of beyond when you reach Takaka, the main (“main” being a relative term – the population is only about 1,000) town in Golden Bay. 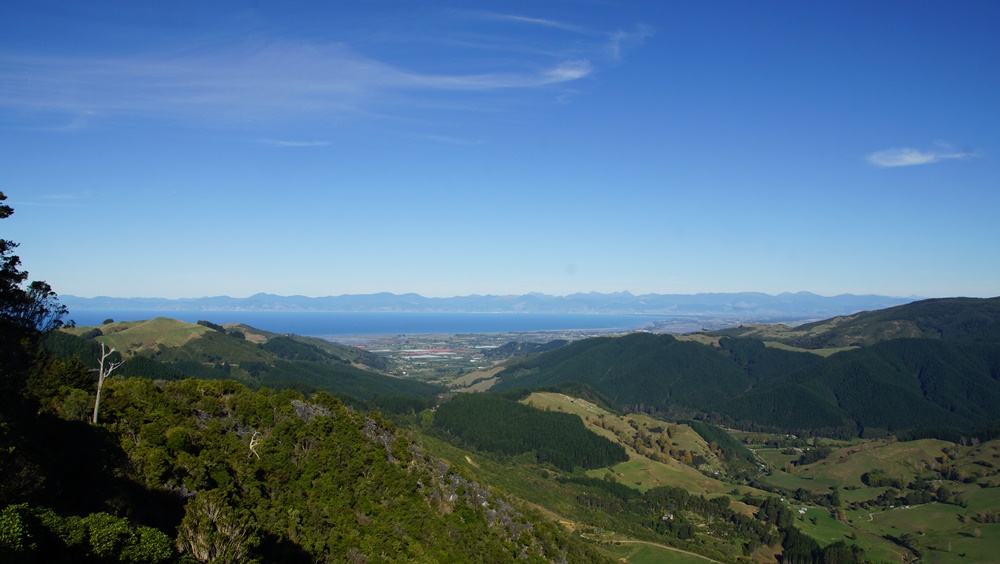 The view from the top of Takaka Hill, looking back towards Motueka (at the bottom of the hill) and Nelson (on the far side of the bay). 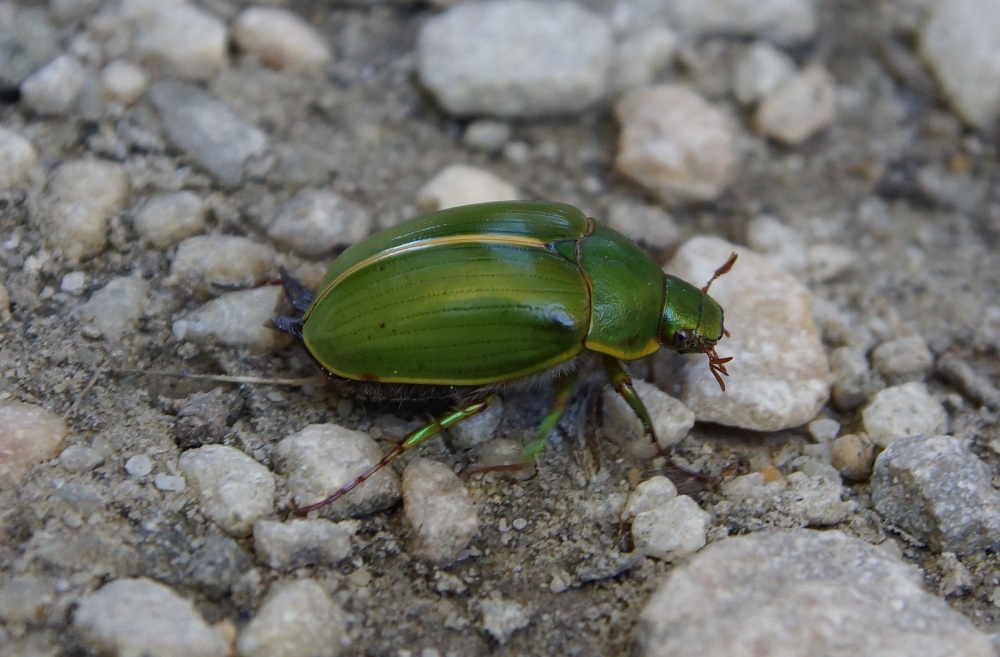 We met this wee guy on the walkway up to the lookout point.
We finally made it to Takaka, and checked into our hostel.  In typical Golden Bay style, instead of the usual adventure tourism brochures you find in most hostels, its brochure rack was filled with adverts for yoga classes and meditation retreats.  The place definitely lives up to its “alternative” reputation 🙂
I did some of my teacher training in Takaka, <cough cough> years ago.  The town hasn’t changed all that much since then – the hippies have become a bit more upmarket, and there’s definitely some better places to eat nowadays, but I still recognised a lot of it.  I think I even managed to pick which was the house I’d stayed in for the six weeks I was there, boarding with my supervising teacher.
Once we’d settled in and checked out the main street a bit, we headed to the Dangerous Kitchen to meet Fuzzle for dinner.  She’d recommended the cafe’s pizzas, and they were very good.  It was great to catch up with her (she lives in Onekaka, just outside Takaka), and we talked for many hours, until the cafe staff started pointedly cleaning around us and we took the hint that it was time to leave.  It turned out that Fuzzle and Lytteltonwitch had travelled to many of the same places in Europe, so enjoyed comparing their experiences a decade or so apart.

The Adventures of Sherlock Holmes by Arthur Conan Doyle – Maruia Falls
On the Road by Jack Kerouac – Vault Cafe, Murchison
Disappearing Through the Skylight by OB Harrison Jr – lookout on Takaka Hill
The New Nature of Catastrophe by Michael Moorcock – Dangerous Kitchen, Takaka

As always with writing up a trip, it’s taking longer than I expected, so I’ll have to stop for now and go and make myself some dinner. To be continued…

What, a blog post about a convention that was only two weeks ago?  What is this madness?? So, yes, the Aus/NZ Bookcrossing convention (or unconvention, technically) was the weekend before last, on Stewart Island.  Stewart Island is not the most obvious place for a convention (for the foreigners, it’s that little island at the very…

I met Lytteltonwitch in town after work again tonight so we could sample more of the delights of the food trucks in the Square.  Not that there were all that many delights to be had, actually – the season is almost over (next Friday is the last until next summer), so there were only a…

Remember those Christmassy mini-quilts I was making?  That I was going to give to pretty much everyone I know?  Yeah, they’re still sitting in a pile next to my sewing machine, half-quilted.  And there is no way I’m going to get them finished by Christmas.  As usual, I totally under-estimated how long each would take,…

Thanks everyone for your kind comments about Pushkin.  No sign of her yet, and no response to the flyer I circulated around the neighbours, but I won’t give up all hope just yet. So, I mentioned Queenstown briefly in the previous post, but only as an aside to the main item, so those bookcrossers among…

I’m off to Wellington in an hour or so, to the NZ Open Source Awards.  I’ve got an acceptance speech memorised and well-rehearsed, just in case we’re lucky enough to win, and I’m only mildly terrified at the thought of having to actually use it. My bag is packed with books for the meetup with…

I didn’t have time to post these the other night, but here’s a few photos from the afternoon at Little River.  Pretty much the essence of summer: I would be incredibly jealous of their house, which is a lovely wee cottage in the classic NZ early settlers style, but then I remember how far they…