DD was down most of yesterday, so I had to post yesterday’s entry on Livejournal instead.  But look, proof I really didn’t break my daily posting streak: 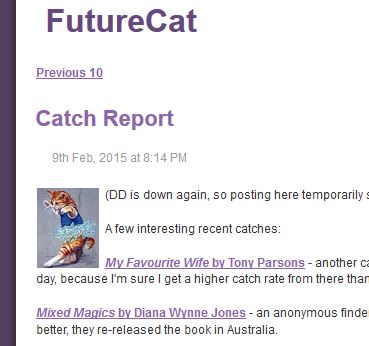 Anyway, here’s a copy and paste of what I would have written yesterday if the site had let me in:

My Favourite Wife by Tony Parsons – another catch from the Wellington YHA. I really should calculate the stats one day, because I’m sure I get a higher catch rate from there than anywhere else I’ve ever released.

Mixed Magics by Diana Wynne Jones – an anonymous finder checks back in five years later (having joined this time!). Even better, they re-released the book in Australia.

First Warning by Anne McCaffrey and Elizabeth Ann Scarborough – a catch from the Adelaide YHA. The anonymous finder didn’t enjoy the book, unfortunately, but at least they journalled it.

Lost Time by Catharine Arnold – a catch from our recent trip down to Alexandra. I’m really glad this one got caught, because I had it in mind for a themed release on the clock on the hill for a very long time before I finally got round to it. And it’s already had some adventures with its new reader, and looks like it’s been re-released, too.

Fishing from the Boat Ramp by Jillian Sullivan – another catch from Alexandra, although the book somehow managed to travel to Stewart Island in the meantime (I’d love to know if it ended up on a boat ramp there, as well – there are a lot of boats in Stewart Island, so there’s a fair chance it did). And in one of those lovely examples of bookcrossing serendipity, it’s exactly the book its finder needed at that moment. I love it when that happens!

When I got home from Queenstown on Wednesday, Parsnips came running to the door to greet me, and wouldn’t leave my side for the rest of the day – I think she must have missed me.  No sign of Pushkin though. I wasn’t too worried, because she loves the outdoors, and now that the weather…

It’s been a busy couple of weeks.  Fuzzle was here for most of the first week – it was great to see her, and we had loads of fun (plus she cooked the most amazing enchilladas for dinner one night – who knew she’d turn out such a good cook after all those barely edible…

spent today at a conference. Well, technically it was an unconference – a THATCamp to be precise, a Digital Humanities event (THAT stands for “Technology And The Humanities”) which is a semi-planned, mostly make it up as you go along, mix of planned and impromptu sessions based around the idea that everyone has something to…

It’s 2015 here in New Zealand, even if most of the rest of the world is still to catch up, and has dawned a lovely sunny day after yesterday’s rain. I reckon that augurs great things for the year – and even if it doesn’t, I fully intend to have a good year anyway 🙂 …