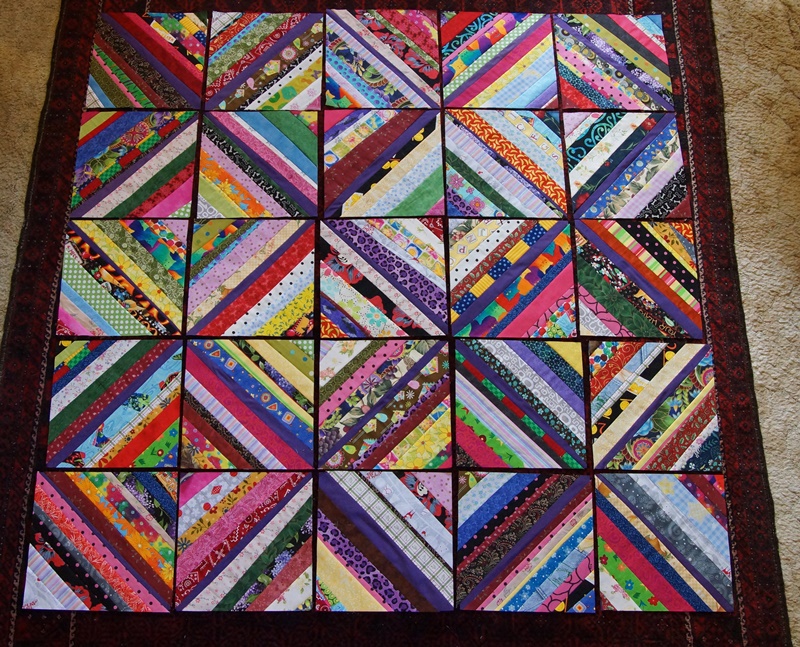 I’d started making a wee lap quilt back in August, but put it aside when I got busy with other projects, and the squares have been sitting in a pile on my desk ever since waiting for inspiration to strike.  With all of my Christmas projects out of the way, and wanting something to practice free-motion quilting on, inspiration struck, and I pulled the pieces out to sew them together.
But when I laid them out, I wasn’t totally happy with them.  Although I’d tried to be totally chaotic with the stripes, the overall effect was a bit boring.  It needed something more, to disrupt the pattern slightly.  And then I had a thought.
Remember this? 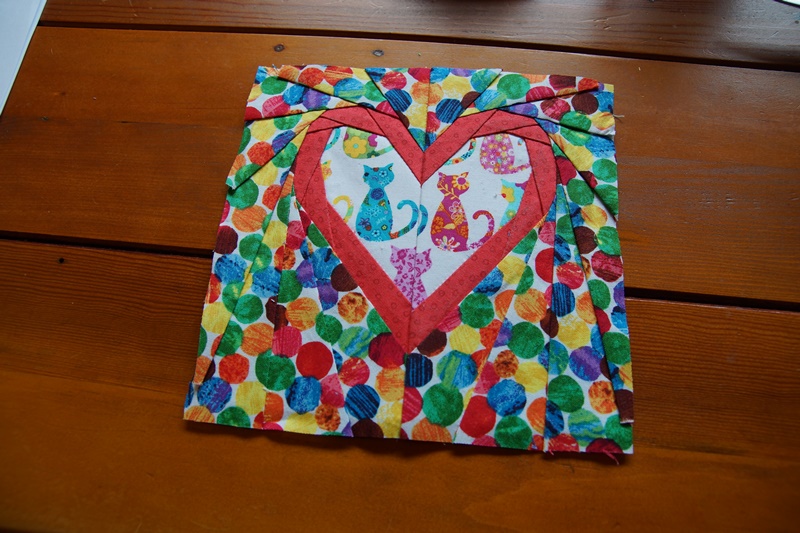 It’s my very first attempt at paper-piecing, produced in the class Tartankiwi taught nearly two years ago.  It has likewise been sitting waiting for inspiration to strike about what to do with it, but it’s quite small, so it never quite fit into anything I had in mind.
Can you see where this is going?
I decided to try something totally experimental and see if I could sew the cat heart into one of the blocks of the quilt, to break up the pattern and add a tiny point of interest.  At first I was thinking it should be in the centre, but it’s so small it just looked lost there, and it broke up the pattern too much.  So instead I put it up in the corner: 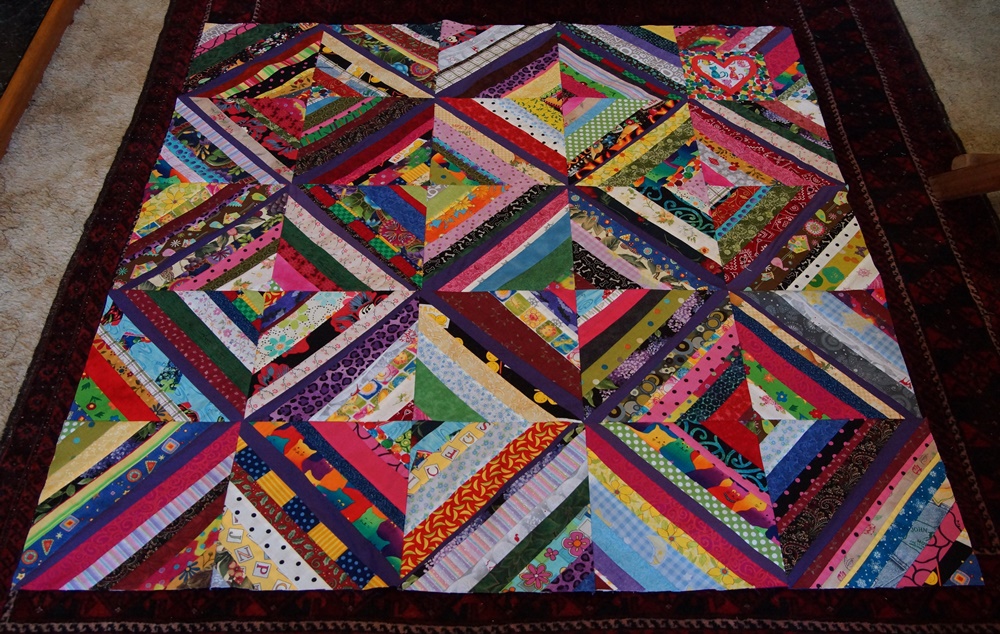 Yes, it’s a bit weird, but I kind of like it.  I think it adds just the right amount of extra chaos to an already chaotic quilt.  And as I’m actually making this quilt for me for a change, I’m the only one who has to like it, so I can do all these silly experimental things and have fun, and who cares if it turns out looking weird or not according to the rules of a “proper” quilt 🙂
(The very sharp-eyed among you may notice that the square the cat heart is in doesn’t actually feature in the original layout of quilt squares.  That’s because I managed to completely mess up my measurements in my first attempt, and cut the square the wrong way, so I had to chuck that one out and start again, making a whole new quilt square to piece the heart into.)
Next step, making a backing for it.  I’ve got some thoughts there too…

I’m at home this morning while the painters finish off the repairs to the ceiling, so, having run out of work I can usefully do from home, I decided to return to my experimental quilt and practice some more free-motion quilting. The pattern is called Nikki’s Jigsaw Puzzle, and was a nice easy one to…

If I actually posted here more often, you’d have noticed that everything looked a bit weird around here for a week or two, because the WordPress theme I was using broke, so the site reverted to a default, and everything went ugly. But thankfully our fearless leader Steve was able to update the theme (which,…

ou guys know me.  You know what happens when a craft catches my attention: I spend some time learning the basic skills, maybe go to an introductory class, do a bit of internet research… and then jump straight into the most complex high-difficulty project imaginable, and try and work out how to do it from…

A week or so ago, I had a toothache.  On a Friday afternoon, of course, because things like toothaches never happen on a day when it’s easy to get a dentist’s appointment.  But I somehow managed to at least get in to see my normal dentist’s assistant.  Who, after a bit of poking and prodding,…