o, I left you with all those loops of squares, 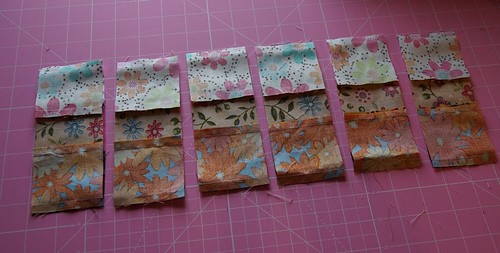 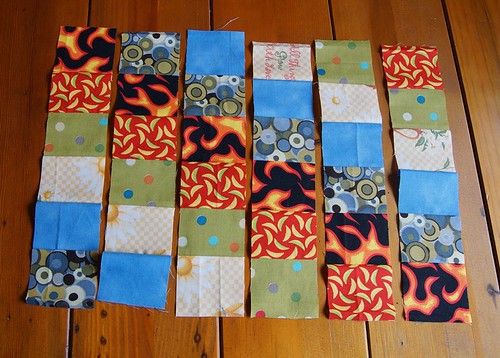 Diagonals!
Ok, so maybe that doesn’t seem all that exciting to you, but I’ve been trying to figure out how it was done (other than just cutting and sewing each square individually, which takes forever, as I learnt with the Minecraft mats) for ages, and couldn’t work it out. So when I saw the tutorial it was a total head-slap moment.
Of course, as you can probably tell from the photo, my squares don’t line up quite as perfectly as they could – it seems my sewing in a straight line skills haven’t improved much since Form 2 sewing class.  But I’m hoping it won’t be as noticeable once all the blocks are sewn together into one big pattern (same with the ever-so-slightly clashing colours – the theory is that once they’re combined with all the other clashing colours, the overall effect will be “fun and colourful” rather than “why on earth would you use those fabrics next to each other?”).
I’m having fun anyway.  And as it’s likely to end up covered in baby vomit, I reckon it doesn’t matter if it’s not quite perfect 🙂