Sometimes I really love my job.  This afternoon, the university’s HITLab (which stands for Human Interface Technology, for the uninitiated) had an open day.  And as we have quite a bit to do with them (we collaborated on the CityViewAR app, for example), our boss suggested we go and have a look around the other projects they’ve been working on.  So we basically got to spend the afternoon playing with cool toys.
And some of the toys were very cool indeed.  I got to try out Google Glass – amazing technology, but totally doesn’t work if you’re short-sighted.  It seems counter-intuitive, because the projector thing is right in front of your eye, but there must be some sort of lens arrangement that puts the focal point further out, because the image appears to be floating about a metre or so in front of you, and for me was just as out of focus as something would be at that distance in the real world.  So I could see shapes, but couldn’t really read the text.  And because the Glass has to be a certain distance from your eye, I couldn’t wear it over my ordinary glasses.  So it’s a contacts or nothing deal.  The guy running the demo also mentioned that although the Glass seems quite comfortable to wear at first, he’d found that if you have it on for any length of time the weight of the battery (which lives in one of the arms) resting on your ear gets quite painful.  So yeah, seriously cool concept, and I can totally see the potential, but it’s not quite there yet.  It kind of reminds me of the early days of mobile phones, when those massive bricks with no battery life weren’t exactly practical and seemed like just an expensive toy, yet were only a couple of generations away from something really useful.
Other cool things we got to play with:

There were a lot of other displays as well, but those were the ones that caught my attention.  Definitely a fun way to spend an afternoon – especially when you’re getting paid to do it!

We actually had a bookcrossing meetup in Christchurch this week.  I know, totally amazing!  It was only a small one – just four of us – but at least it was a meetup.  I really should put some effort into contacting new members (or maybe even releasing some books so we get some new members…), but I’ve kind of had other things on my mind this year (as well as being a bit discouraged by the long-term members who never make the effort to turn up).  Maybe now that life has settled down I’ll be able to put some energy into it again.  Anyway, it was a good night, and many books and much news was exchanged.

Unexpectedly, my new cabinet got delivered on Wednesday night.  I didn’t expect to get it until tomorrow, so that was a nice surprise.  It fits the space perfectly, and looks wonderful, too. 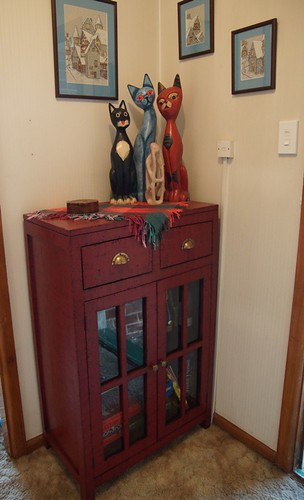 I haven’t quite decided what’s going to sit on top of it yet – the current arrangement is just temporary while I’m trying different ideas out.  Oh dear, I may just have to go shopping to find the perfect piece… 🙂

Another new pretty: I saw this artist‘s work on the Works in Progress blog, and couldn’t resist buying a print.  She captures the flash of colour of a kereru (wood pigeon) so perfectly. 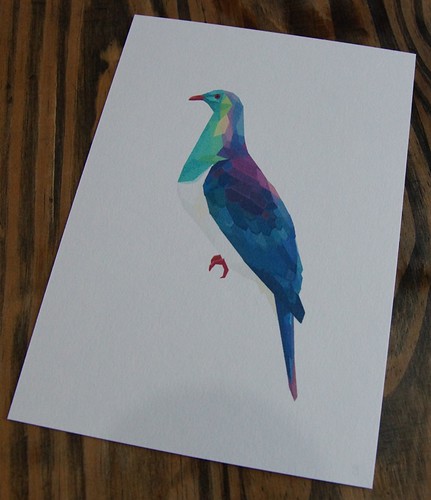 Now I’ve just got to find a suitable frame.  I miss my old go-to framing place – they always had such wonderful choices.  Unfortunately, another casualty of the earthquakes 🙁

And a pretty that brings me joy every year – my flowering cherry has once again transformed my scruffy front yard into a spectacular display: 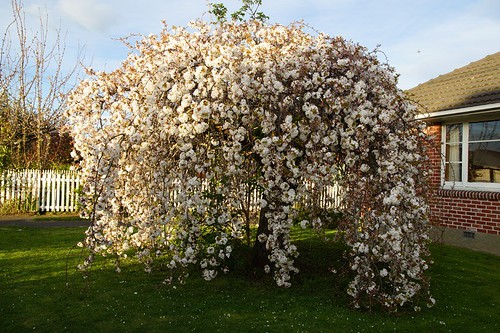 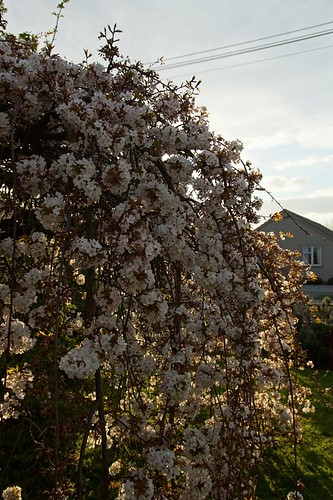 I’m so glad it held off on flowering until after those winds last week!

And finally, why you should never leave a bin of fabric in a sunny spot: 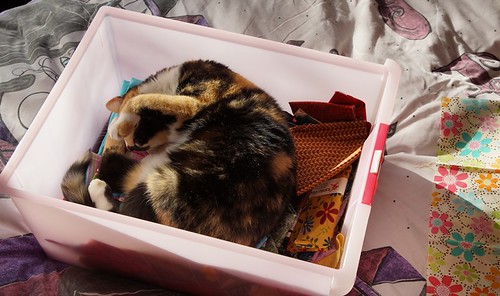 I’d been looking through some fabrics the other day, planning out a wee project I’ve got in mind, left the room for five minutes and came back to find Parsnips installed in what was obviously the best seat in the house.

Today we grouted the little test pieces of mosaic Mum and I were playing with: They haven’t quite finished drying yet, so they haven’t been polished. Not the most artistic, but we had fun 🙂

t’s been a very long time since we had regular Bookcrossing meetups in Christchurch, what with one thing or another, but with Lytteltonwitch being back in town, we decided to give them another go.  So she emailed a few new members, plus some of the old-timers, and arranged a meetup for this morning. And we…

ight, I promised you a description of Tuesday’s pōwhiri.  It was due to start at 9.30, but we were instructed to be there at least 15 minutes early, because once the pōwhiri gets started, it’s incredibly rude to interrupt it, so basically, if you’re late, you miss out (and as missing the pōwhiri would have…

abbit is a very pleasant meat to eat, but it smells disgusting while it’s cooking, especially when boiled.  Same goes for hare.  I’m currently cooking meatballs made from some hare mince my brother gave me, and even though I know they’ll taste fantastic once they’re done, I’m trying to avoid spending any time in the…

ast week I released a few books in the reception area along the corridor from our office. There’s always a queue of students waiting there to see the student advisors, so I thought some of them might appreciate a book to read while they waited.  It worked, too, because the books were snatched up very…