It’s been a busy couple of weeks.  Fuzzle was here for most of the first week – it was great to see her, and we had loads of fun (plus she cooked the most amazing enchilladas for dinner one night – who knew she’d turn out such a good cook after all those barely edible “experimental” meals we ate back when we were flatmates?).
She went home on the Thursday, and then on the Friday Dad arrived with the kids.  The main reason for the trip was to take Niece to see Disney Princesses on Ice (or something like that, anyway – no idea what it was actually called, but it was some combination of those things), but he’d also promised to help me with a few repair jobs around the house.  And the boys, of course, just wanted to play Minecraft with me (although ironically it was actually Niece who spent the most time playing Minecraft – the boys rediscovered Lego Star Wars on the playstation, and almost managed to complete the entire game in one weekend (which kind of tells you how little of anything else, including sleeping, they did!)
Combining a visit from the kids and Dad getting work done round the house was exhausting – I seemed to spend all my time jumping from computer to playstation to trying to actually help Dad (or at least stand there trying to get him to accept my help and maybe remember that he’s not 21 any more and has bad knees so really shouldn’t be trying to balance on top of tall ladders…) while the kids are calling out for me to come back to the game.
The most peaceful moment was actually when I took the boys to Laserstrike while Dad and Niece were at the Disney thing.  For the first game at least, I got to sit in the foyer and quietly read a book while the boys raced around with a bunch of other pre-teens trying to kill each other.  Unfortunately the peace was shattered shortly into their second game, when Nephew #2 managed to run full-tilt round a corner into another kid’s gun, resulting in lots of tears and a nasty black eye.  (I was very unimpressed by the staff’s reaction, by the way – according to Nephew #1, who saw the collision and went to look after his brother, the guy in charge just said “Take him out and find your parents”, and didn’t seem all that concerned.  And then when I asked at the desk for an icepack they didn’t have any such thing (Really???  With all the bumps and bruises that must happen constantly in that place?  Sometimes I think it would be nice to live in a more litigious society…)  In the end I bought a popsicle to use as a makeshift icepack (which did have the bonus of being a useful diagnostic tool – when he asked if he could eat it I figured he must be feeling better ;-)))
Then Nephew #1, who’d gone back in to finish the game while I comforted Nephew #2, came back out because his gun had stopped working.  Which happened again in his third and final game.  So Laserstrike, which was supposed to be their birthday treat (both of their birthdays were this week), turned out to be a bit of a flop all round.  They were given vouchers for a free game if they wanted to come back, but both had such disappointing experiences I’m not sure they’ll ever want to use them.
The rest of the visit was good though, and they had lots of fun (even though I made them do the dishes – mean aunty!)
Between kids and building work the house was a total mess by the time they left on Sunday.  After I waved them off I thought I’d sit down for five minutes then start cleaning up.  Three hours later, I woke up 🙂  So I didn’t really get the house back to normal until yesterday, when I could finally give it a really good clean.  Life feels so much more manageable when the house is tidy!

Big and scary news: I’m presenting at an academic conference on Wednesday!  And not even in my own field!!!
Our programme funded a load of earthquake-related research projects last year, so we decided to set up a mini-conference so the research teams could report back to our funding committee on their progress.  It was supposed to be just a little internal thing, only a handful of people, so when my boss asked me and one of the analysts to jointly do a presentation on the archive as a whole, we happily agreed.  Of course, then the marketing people got hold of it, and decided it was a great opportunity to let the public know about the great research coming out of the university, so they did lots of advertising and opened it up to the public and invited all sorts of important people, and our little mini-conference has suddenly morphed into something much bigger, and I’m suddenly faced with giving a presentation at a full-on conference!  Eeek!!!!
So, my first ever academic conference presentation, and it’s not even in Linguistics.  I feel like I should wear a t-shirt saying “I don’t even have a degree in this subject – please don’t ask me any tough questions!”

Random thoughts from a trip into Riccarton today:
The importance of customer service.
I’ve been thinking of buying a wee CD player for a while, having given H the big stereo and the kitchen radio.  So, feeling slightly less poor than usual, I went into Dick Smith to have a look, and spotted a $50 one that looked ok.  I wanted to ask a question about it, though, so tried to get a salesperson’s attention, and waited, and waited, and waited… Eventually I got sick of waiting, and went to Noel Leemings instead, where a salesperson came up to me straight away, and gave me friendly and helpful advice even though it was obvious I wasn’t going to earn him a big commission.  As a result, even though they didn’t have the $50 model, only a $70 one, I happily paid the extra $20.
Losing a tiny $50 sale isn’t a big deal for Dick Smith, I’m sure, but how many other little sales do they lose because their salespeople don’t pay attention to customers unless they’re looking at big-ticket items?  It must add up.
The importance of a name.
I saw an ad on the side of a bus for the Women’s Refuge, which has just been rebranded as “Aviva” – something to do with their wider remit these days than just providing shelter for abused women.  A few thoughts sprang immediately to mind:

Craft progress report:
Actually, I can’t show you any pictures of my latest projects, because they’re both intended for people who definitely do read this blog.  So you’ll just have to wait for the big reveal.
The weather hasn’t been brilliant, and as mentioned, I’ve been a bit busy, so I’ve only managed to put a couple of coats of varnish on my mosaic table.  The fabric soaks up the varnish enormously, so I reckon it’ll need at least 2 or 3 more coats before it looks right.

This has got to be the longest actual writing entry I’ve posted in a very long time – I seem to have defaulted to lots of pretty pictures and few words lately.  But I can’t let it go without at least one pretty picture, so here’s the cat drawing Yetzirah sent me, which I finally framed and hung. 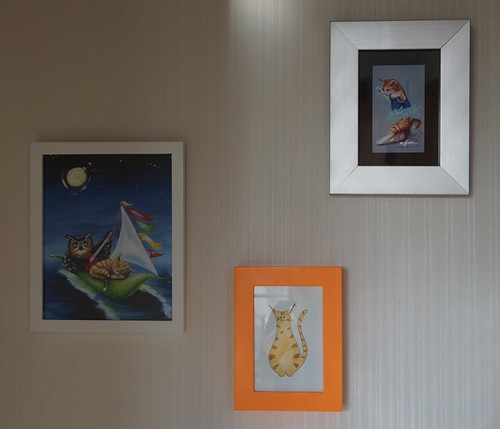 It’s in good company, with a couple of my favourite cat prints (and yes, I know they’re a bit crooked – I’ve given up straightening pictures, because every time I do we have another wee earthquake and they all move again!)

ne of my colleagues is part of Generation Zero, an organisation that’s putting the lie to the idea that young people aren’t interested in politics any more.  With the elections coming up she’s been getting involved in a lot of the local campaigning, and she mentioned the other day that the Greens were looking for…

Phase 2 complete: (Photos taken by Lucy-Jane) Yes, the lights do flash on and off.

or the last few months, when I was way too busy to do anything crafty, I indulged my need for creativity by watching YouTube videos on quilting, and looking forward to having the chance to put some of what I learnt into practice (oh, and by buying fabric.  Lots of fabric. (See, this is why…

just had lunch with Sam Neill. Ok, not really, but I did have lunch in his vicinity, at the same event he was at. That totally counts, right? 🙂  I was at one of those “free pizza for everyone!” welcome events for new students being given by the School of Humanities and Creative Arts (which…