Still here, and still coping, though it’s very much a case of two steps forward and one back.  I may write some more about that later, but I don’t feel much like it right now, so instead, muffins!
Dad was in town briefly on Friday on his way to a wedding, so he dropped off a huge box (and I mean huge – it was one of those bins supermarkets use for displaying fruit) of peaches and nectarines.  More than I’ll ever be able to eat in their fresh state, so there’ll definitely be some chutney-making going on over the Easter weekend, and probably quite a bit of baking as well.  For now though, I just settled for stewing a few for pudding last night, and made some peach muffins to take into our Monday morning meeting at work tomorrow.
And in a vague attempt to kick-start myself out of the uncreative rut I’ve been in, a muffin-based photo essay: 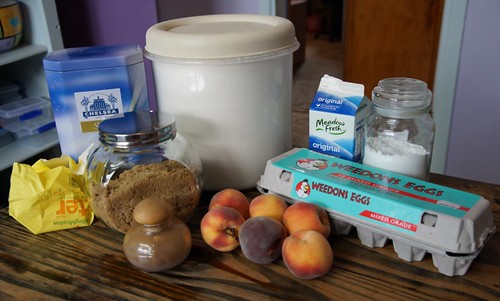 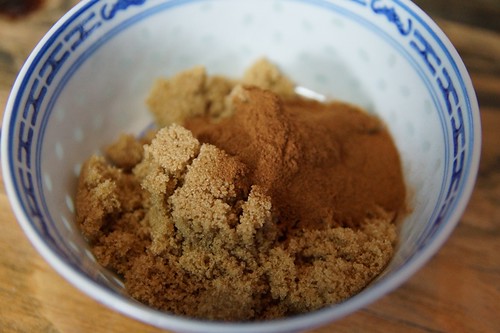 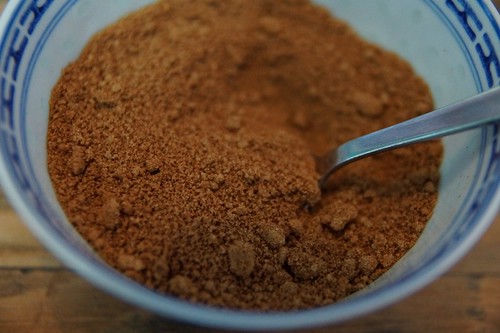 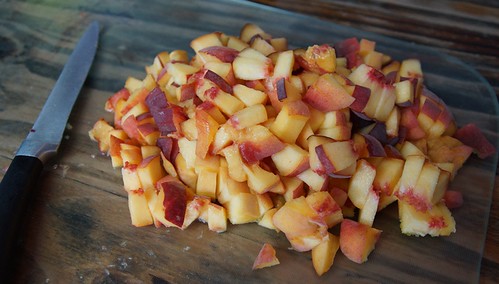 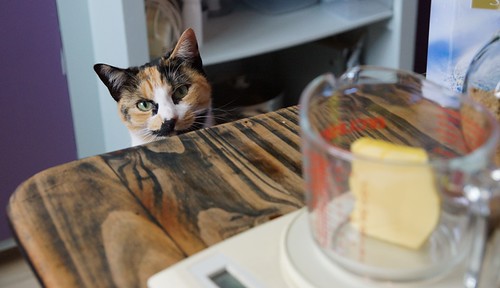 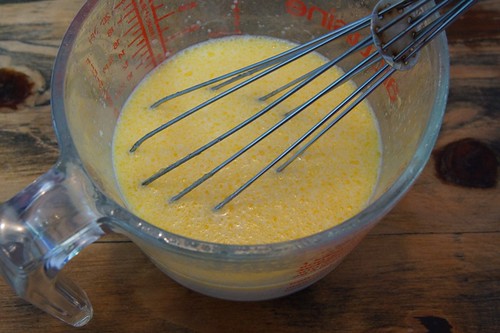 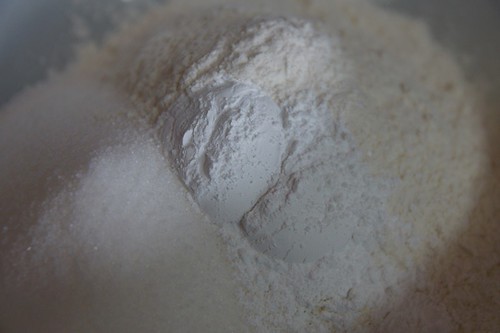 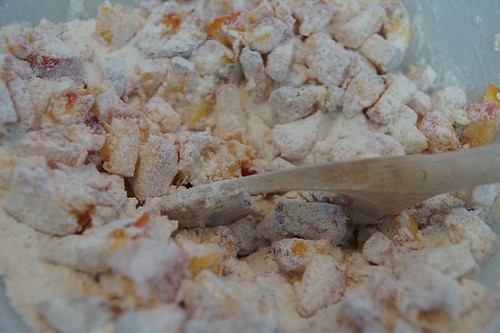 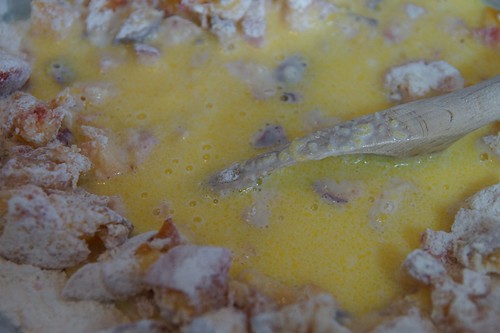 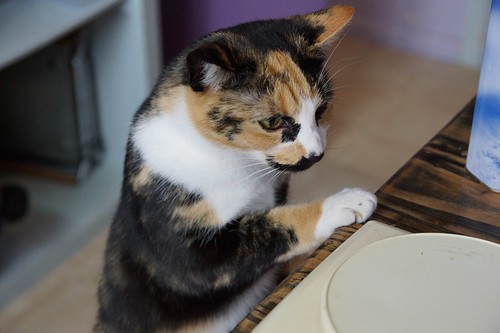 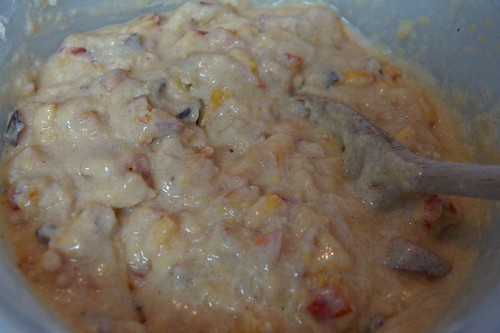 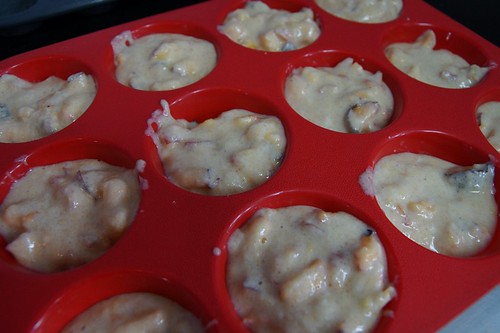 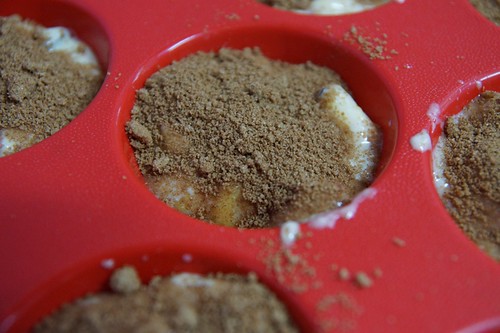 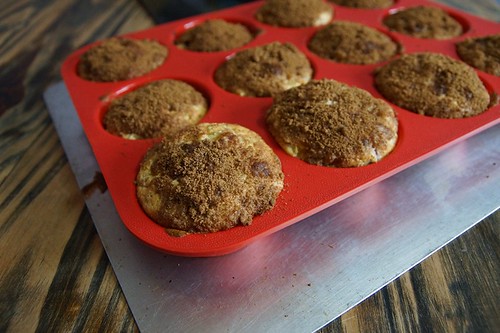 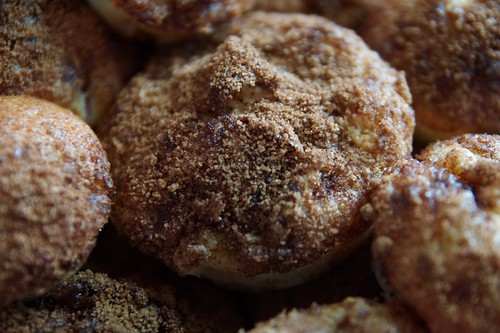 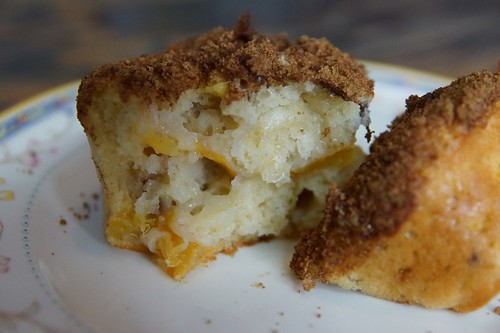 And the recipe, in case you’re feeling hungry after all that:
1-2 cups peaches, diced (you can leave the skin on as long as you cut them small enough)
1/4 cup brown sugar
1 tsp cinnamon
40g butter, melted
3/4 cup milk
1 egg
225g flour
125g sugar
3 tsp baking powder
Mix brown sugar and cinnamon together and set aside.  Mix butter, milk and egg together.  Mix dry ingredients, then stir through peaches.  Add milk mixture and mix until just combined.  Spoon into muffin tins, then sprinkle over cinnamon mixture.  Bake at 200 C for about 15 minutes.
Notes:

ow that the grey and horrible weather has ended (to be replaced by a nasty nor’wester that makes it too hot to move – we can’t win), I decided to make the most of a bit of sunshine to go for a walk with my camera this morning.  I only got as far as Jellie…

It’s been a strange sort of week.  We knew we’d be shifting offices sometime this week, and that we would have to stay away from the office on moving day so we didn’t get in the way of the movers, so we’d talked about having some sort of team field-trip, maybe involving a site visit…

DD has been down again, or at least, the ability for some of us to log in properly has been, so these two entries are ones I wrote over the last couple of days but haven’t been able to post until now (so the “yesterday”s are several days ago now – I’ve added in the…